All technical details can be found in the Process section.

In February 2020, ESET released the KR00K - CVE-2019-15126 SERIOUS VULNERABILITY DEEP INSIDE YOUR WI-FI ENCRYPTION research. The vulnerability works as follows: 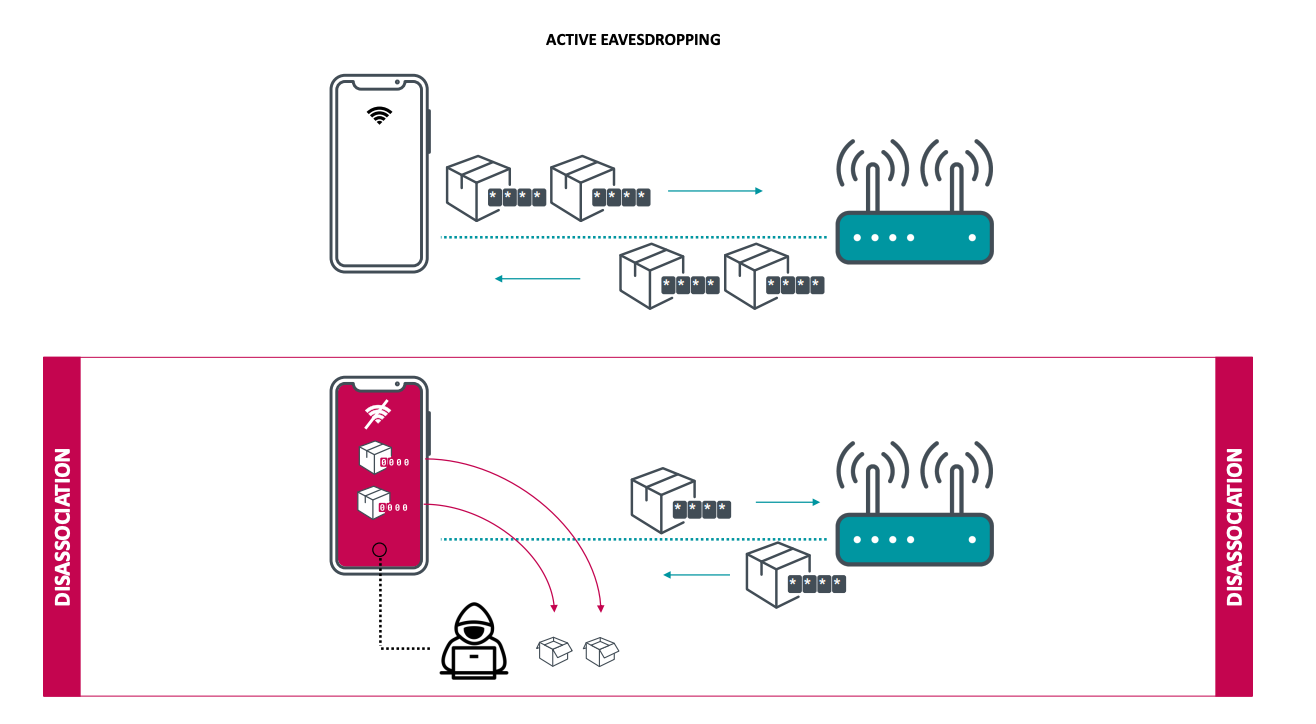 Figure 1. Not quite obvious, but if you look closely, then it’s a clear diagram that we took from ESET’s whitepaper

The following devices were claimed vulnerable:

So, since we have Raspberry Pi 3 ready at hand, let's find out whether Kr00k actually works. Surely, ESET researchers or some community members have already published a PoC, haven't they?

Umm, Google found nothing but a pile of FUDs and an empty GitHub repository.

Ok, let's make it ourselves.

UPDATE: while we were drawing the logo for this publication, Thice Security posted a PoC as well.

The kr00k attack is quite straightforward. So, it didn't take much time for us to write our PoC.

To check whether a device is vulnerable, it'll suffice to run the r00kie-kr00kie.py python script with bssid, channel number, and the victim's mac address used as parameters and to have a bit of patience.

After testing this PoC on different devices, we found out that the data of the clients that generated plenty of UDP traffic was the easiest to intercept. Among those clients, for example, there are various streaming apps because this kind of traffic (unlike small TCP packets) will always be kept in the buffer of a WiFi chip.

BTW, here is another couple of devices we've used to prove the attack does work:

All in all, now you have another tool you can use during one of your Red Team projects or security assessments of your clients' WiFi networks: https://github.com/hexway/r00kie-kr00kie

Do not forget to have a look at the Process section. There you'll find more details about this PoC development and the way it works.

As we know from the report, after receiving Deauth packets, vulnerable devices set the session PTK to zero. At the same time, the TX buffer may still contain data that has to be sent to the client. As a result, all data is encrypted with an all-zero key and broadcasted.

It’s not too complicated, let’s take a look at the mechanics of the attack:

I used Raspberry pi3 B v 1.2 I had in my backpack. RASPBIAN on it hadn’t been updated for at least 6 months, so the Wi-Fi firmware had to be vulnerable. 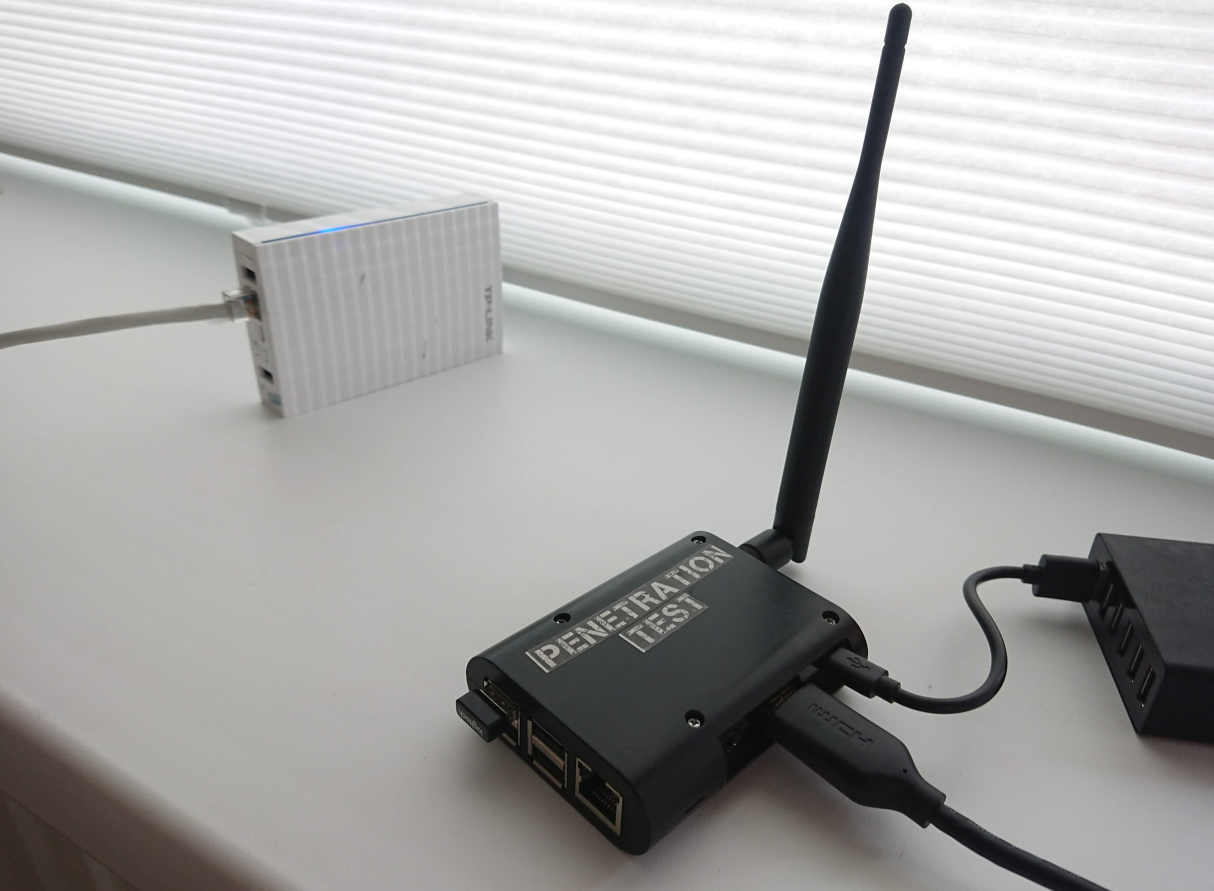 For the access point, we used the good old TP-link m13u on Atheros (mustn’t be vulnerable to the attack) OpenWRT installed. 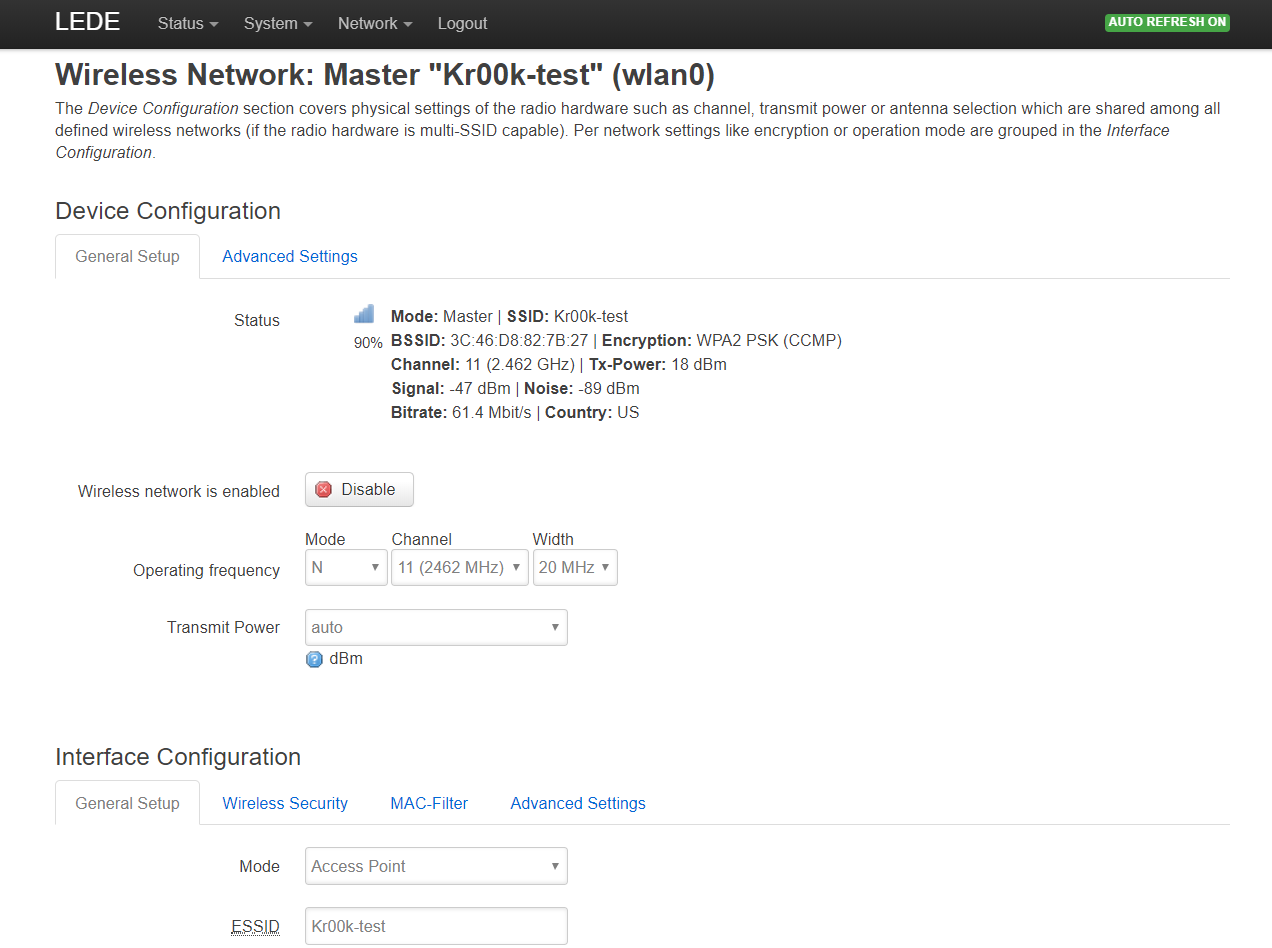 Connect Raspberry to the Kr00k-test network. That’s it, our test stand is ready.

On the attacker side, we have to install the latest aircrack-ng (released in January).

This toolkit has almost everything we need:

We also need airdecap-ng, which requires some improvements.

1) To decrypt data, it uses the PTK value from the st_cur structure, which is filled in during the analysis of the 4-way handshake at the beginning of the session. Then, it is passed to decrypt_ccmp, where the crypto-magic happens.

Since we want to try and decrypt all data packets with an all-zero key, we have to hardcode a zero PTK value.

2) We also have to disable the check for an existing PTK for a current session since we presume that our zero PTK works for any data.

3) Now, we complete the output:

And we put it all back together:

So, we can begin.

DOUP! Every time I have the same problem: I can’t guess what comes first – the interface or the command. 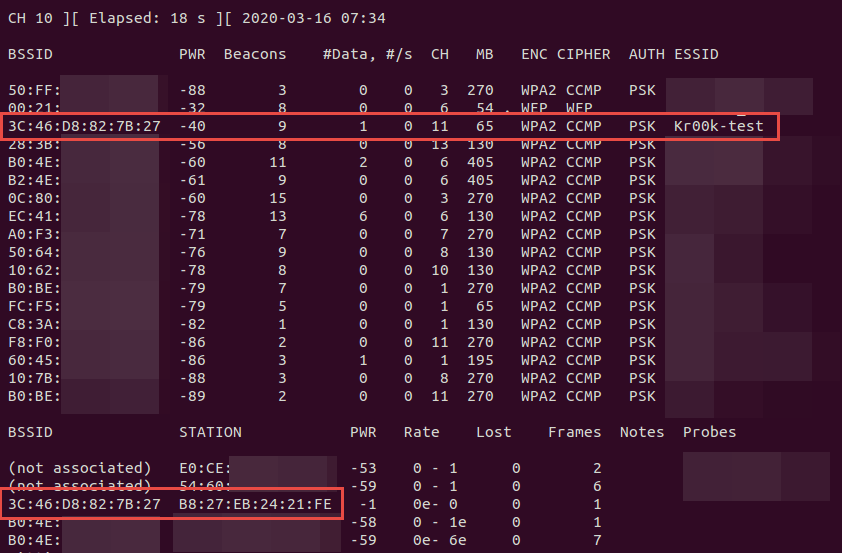 The more outgoing traffic is generated by the vulnerable device the easier it is to exploit it. We will use Ncat and generate UDP traffic in the cycle.

We run the sniffer with filters for the AP and fix the adapter on channel 11 to capture everything.

After 5 connection breakdowns, we stop airodump to see the results:

-k sets PMK, but since we’ve cracked everything with our patch, we can set any value.

Great! All decrypted packets are saved in test1.cap-01-dec.cap 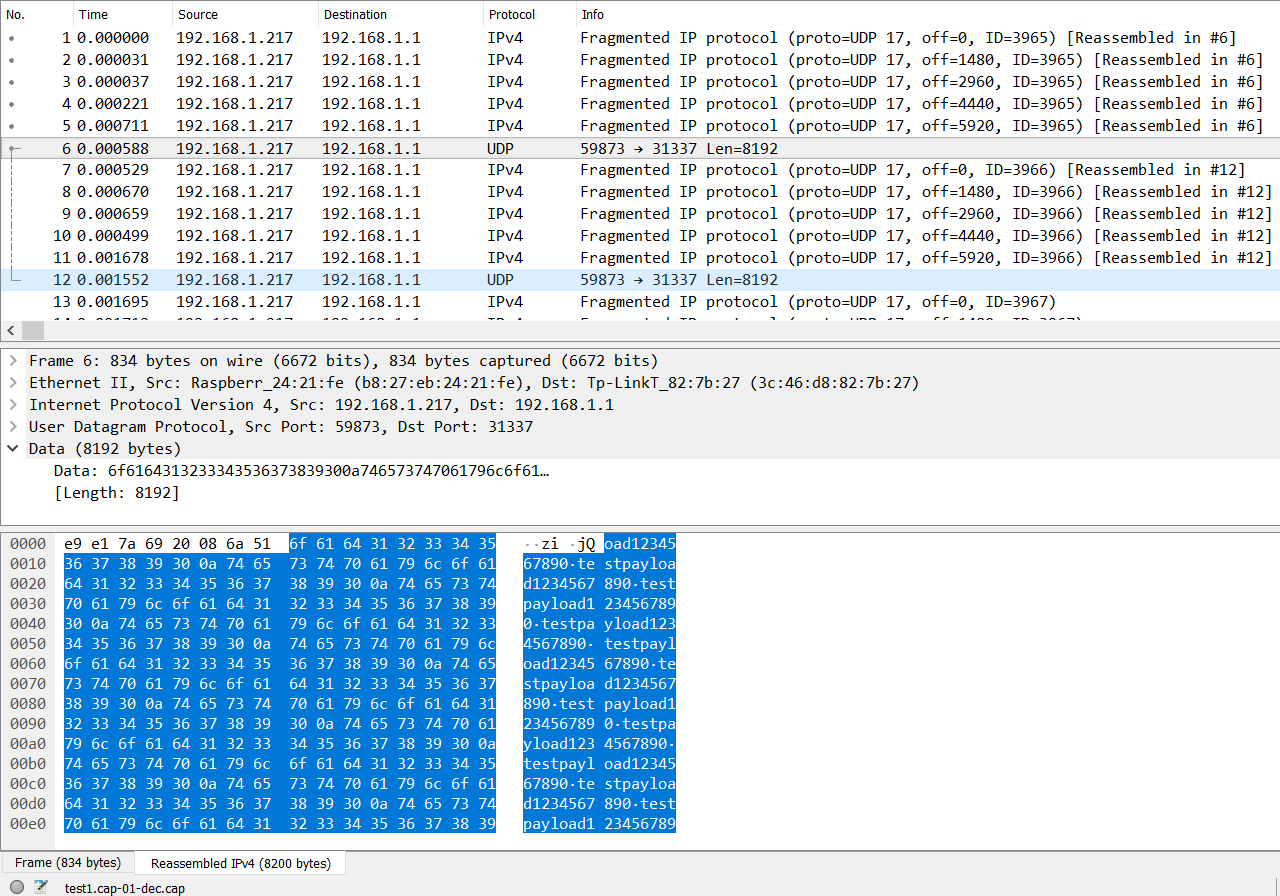 Some packets have been successfully decrypted with a zero key, and now we have data in plain text.

Let’s break it down and do everything ourselves using Python.

During the authentication and 4-way handshake a Pairwise Transient Key (PTK) is set that is later used to encrypt data with AES in the CCM mode. Besides the key, a nonce is required to initialize the cipher. It consists of the QoS value, sender address, and packet number (PN). 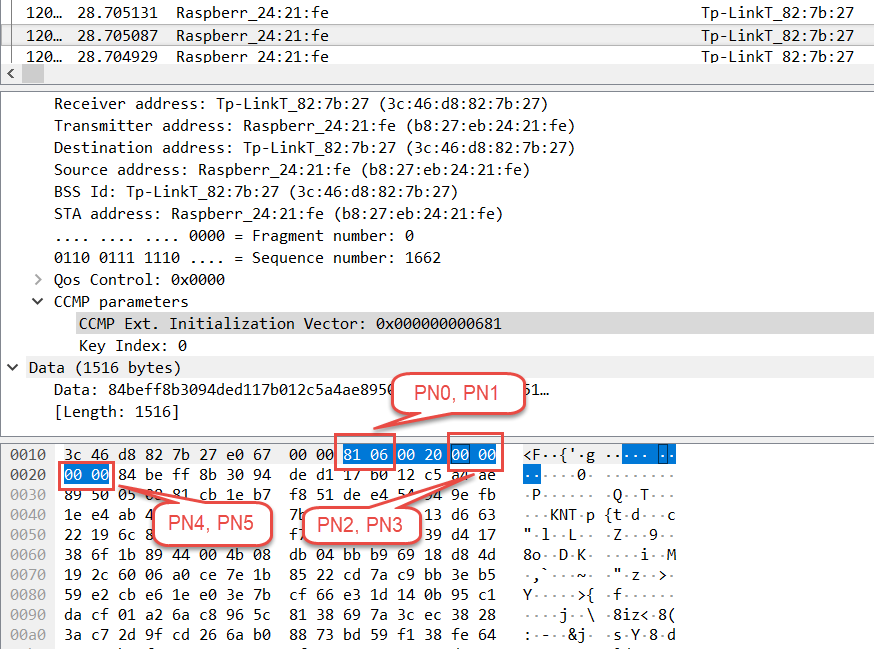 We use scapy to parse PCAP:

Then, select all frames with CCMP data, compile the nonce, initialize the cipher, and decrypt the data with an all-zero key:

For most normal packets we would get trash results because of the wrong PTK. So, we have to be able to identify correctly decrypted data.

Besides encryption, CCMP enables integrity control by calculating the digest using additional data sets. In our case, it is easier to check correct decryption by the Logical Link Control (LLC) header, which is located in the beginning of decrypted data.

If everything is successful, we get Kr00ked data, then save it in PCAP, simultaneously converting the LLC header into Ethernet header; we get the information on sender and receiver addresses from the original 802.11 frame.

Finally, we print the count of successfully decrypted packets:

With a functioning PoC, we have enriched the functionality of the script with a built-in sniffer and deauthenticator 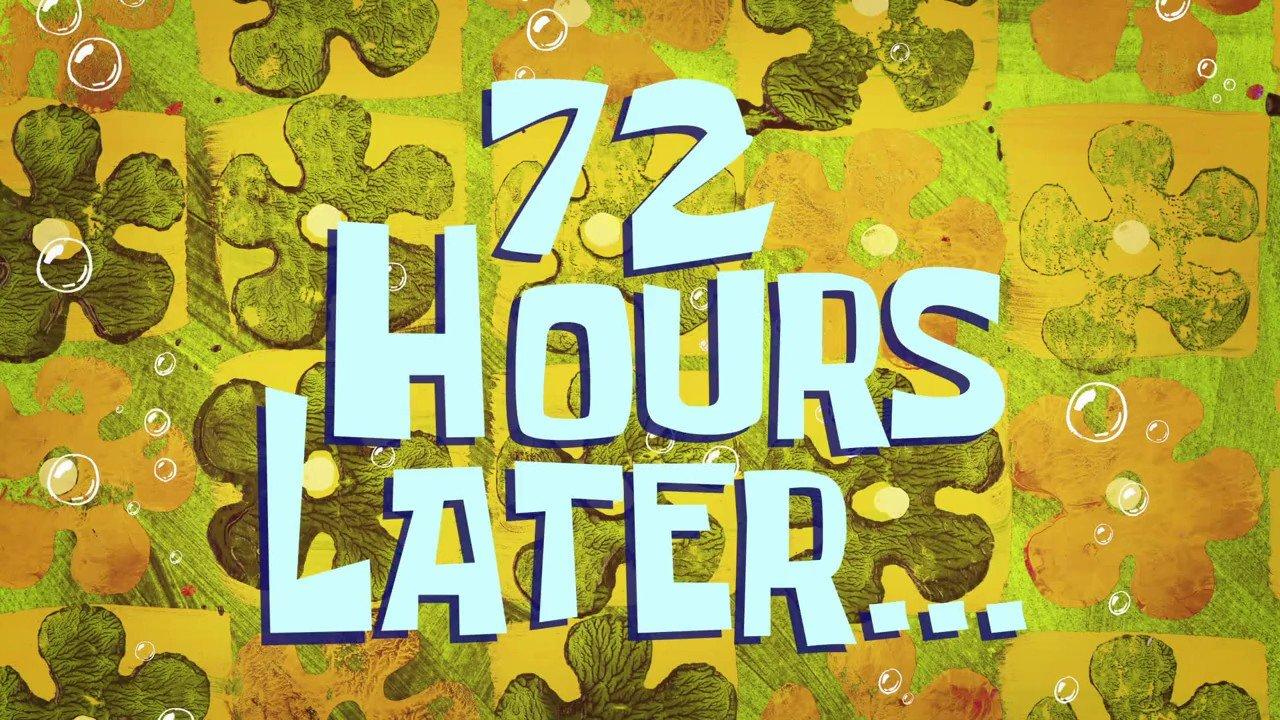 TL;DR We created and published a PoC exploit of the kr00k attack (CVE-2019-15126): https://github.com/hexway/r00kie-kr00kie All technical details can be found in the Process section. INTRODUCTION AND MOTIVATION In February 2020, ...

TL;DR We created and published a PoC exploit of the kr00k attack (CVE-2019-15126): https://github.com/hexway/r00kie-kr00kie All technical details can be found in the Process section. INTRODUCTION AND MOTIVATION In February 2020, ...